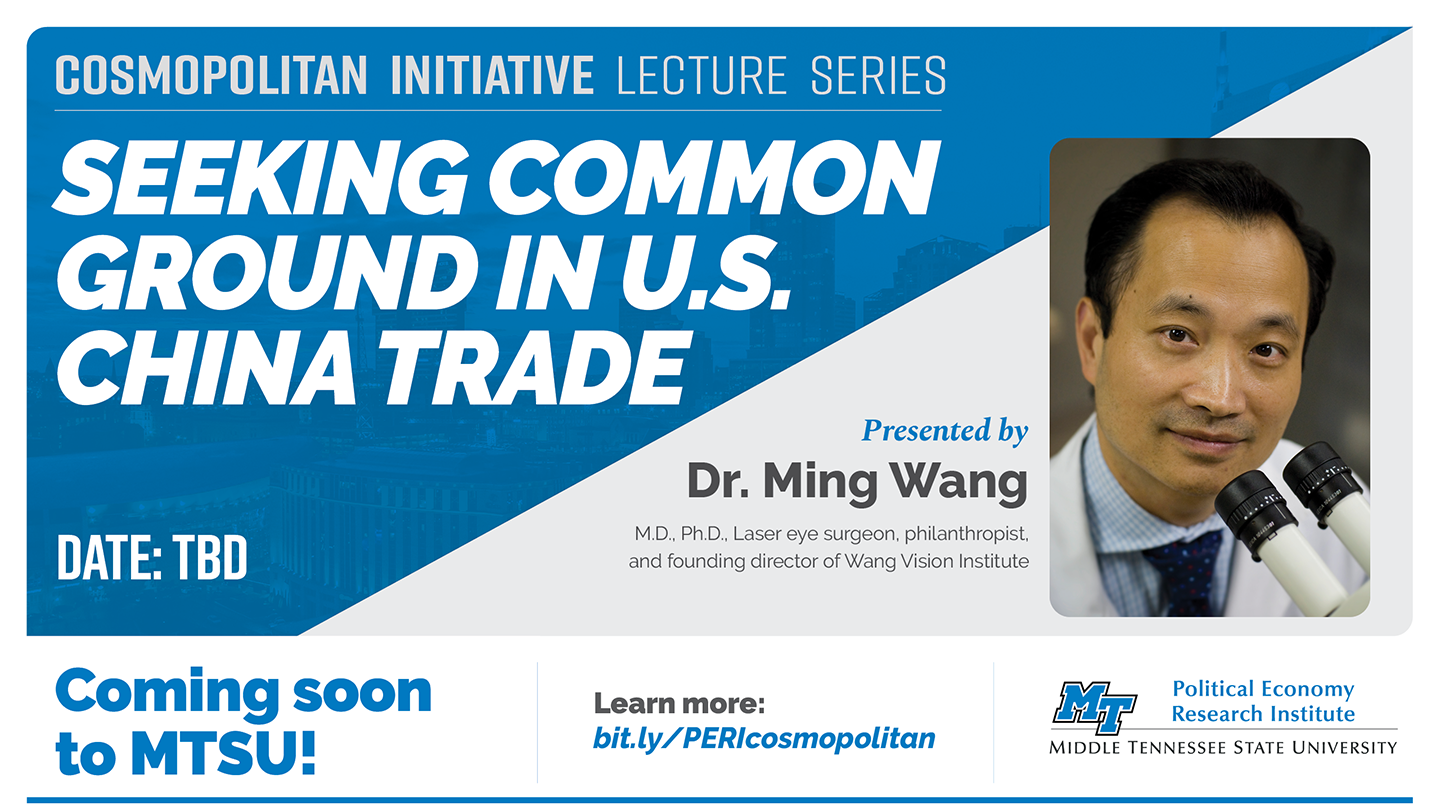 About the Lecture: In this presentation, Dr. Ming Wang, M.D., Ph.D., will discuss what the two superpowers of the 21st century, U.S. and China, have in common, in history, culture, sport, people, custom, food, economy, religion and other areas. He will analyze the mutually beneficial trade opportunities, including for Tennessee. Dr. Wang firmly believes that while ideological differences do exist between the world’s #1 and #2 powers, it is in the seeking common ground that we do share, particularly in trade and economic exchange, that will help improve living standard and quality of lives of people of these two great nations. The film “Sight” is based on Dr. Wang’s autobiography as an immigrant “From Darkness to Sight”, co-starring Greg Kinnear.

About the Speaker: Dr. Wang is a world-renowned laser eye surgeon, philanthropist, founder of the Wang Vision Institute, and a co-founder of the non-profit Common Ground Network. As a teenager, Ming fought valiantly to escape China’s Cultural Revolution – during which millions of innocent youth were deported to remote areas to face a life sentence of hard labor and poverty. He came to America with only $50 and earned two doctorate degrees, one in laser physics and one in medicine, and graduated with the highest honors from Harvard Medical School and MIT. Wang Foundation for Sight Restoration has helped patients from over 40 states in the U.S. and 55 countries, with all sight restoration surgeries performed free-of-charge.

About this Series: To promote a civil dialogue on the economic, philosophical, and political benefits of an interconnected, tolerant, and cosmopolitan world, this series explores the role of global trade, immigration, and de-escalation in establishing a more peaceful and prosperous future for all of humanity. The lead sponsor for this lecture series is Dr. Ming Wang. Upcoming guest lectures will be moderated by Dr. Wang and faculties of the MTSU Political Economy Research Institute.

"The purpose of diversity and why it actually matters - A visit with Dr. Ming Wang provides some practical perspectives for progress and prosperity", by Ryan W. Hirsch, The CONNECT Magazine | Winter 2017.